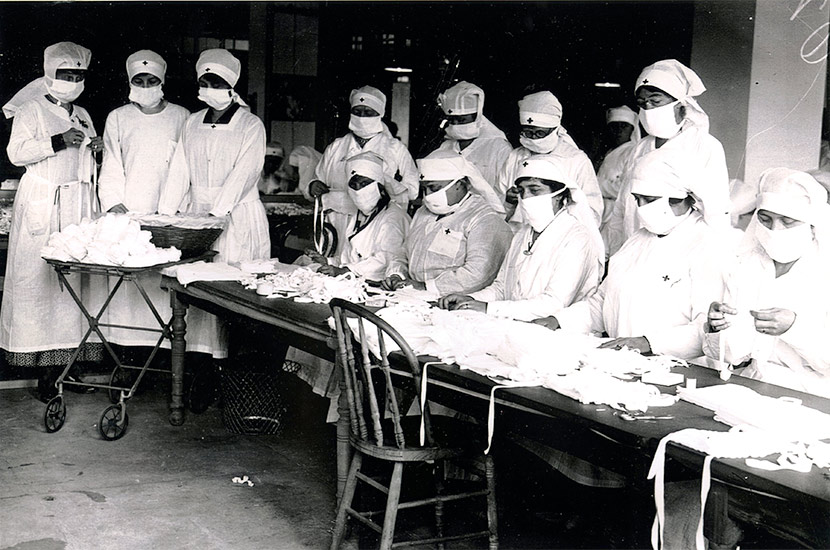 A Tale of Two Pandemics

Like everyone, I’m homebound because of the COVID-19 pandemic. As a result, I’ve found myself revisiting the research I did for the Pandemic 1918 presentation I gave at the Loring Greenough House in the fall of 2018. (I used many resources in my research but I found The Great Influenza, The Story of the Deadliest Pandemic in History by John M. Barry to be especially informative and well written.) As I went through my notes and presentation, I found myself comparing the influenza pandemic of just over a century ago with our current COVID-19 pandemic and finding similarities and differences between the two.

It’s important to point out that a pandemic occurs when a new strain of a virus that people don’t have immunity to emerges and spreads worldwide. 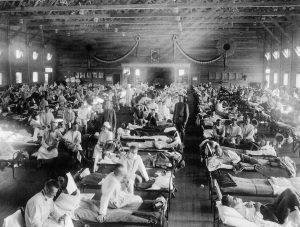 The Pandemic of 1918 lasted for one year (March 1918-March 1919) through three waves. During the first wave, (spring-summer 1918,) the pandemic set off few alarms, chiefly because in most places it rarely killed, despite the enormous numbers of people infected. It was the lull before the storm.

More than half the U.S. deaths occurred during Wave 2 (from mid-September to early December 1918). It spread throughout the world and killed 50 million to 100 million people, including approximately 675,000 in the United States before it ended in 1919. By the time of the third wave (late December 1918-March 1919), the virus had passed through the population and those who recovered had developed at least some immunity to it. Individual cases continued to occur but the explosion of the disease ended. The virus continued to mutate and as time went on it became less lethal.

Now, 102 years later, another pandemic is spreading around the world. Although the 1918 and the 2020 pandemics were caused by different viruses—in 1918 an influenza virus and in 2020 a novel coronavirus, they both spread worldwide.

Initial Responses to the Pandemics

The response in the United States to both pandemics was slow due to a lack of leadership at the federal level. In 1917, the country had just entered World War I and President Woodrow Wilson was concerned about the impact of the war effort and later the pandemic on public morale. He urged Congress to pass the Sedition Act, which made it punishable with 20 years in prison, to “utter, print, write or publish any disloyal, profane, scurrilous or abusive language about the form of government of the United States.” As a result, while influenza spread throughout the country, newspapers (the main source of information for Americans) downplayed or completely ignored the pandemic. Local public health officials throughout the United States were determined to keep morale up and began to lie about the threat; also, no national official ever publicly acknowledged the danger of the flu. Meanwhile, the American people knew something terrible was happening as the flu spread and people died. Even though the government’s objective was to preserve public morale, the opposite happened and Americans lost trust in the government.

In late 2019 the world knew that the COVID-19 virus was spreading through Wuhan, China. By January 2020 it was spreading from China to other countries, including the United States. The federal government knew this but initially downplayed what was happening and ignored warnings by prominent public health officials. Instead, it assured Americans that “it will all work out well.” This has left Americans unsure of what to believe and what to do. 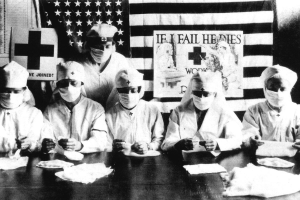 In 1918 there were not enough physicians and nurses to meet the civilian demand for healthcare because of the calls for military service. Also, ventilators, personal protective equipment (PPE), and testing didn’t exist.

Fort Devens in Ayer, Mass., and the Boston area were the first places in America hit by the pandemic’s second wave. Throughout September 1918 the situation grew increasingly bleak. By mid-September there were 21 flu-related deaths reported in Boston alone. Within a week that number would jump to 334. By October 1 the city was experiencing deaths at a rate of about 200 a day, and 85,000 cases had been reported statewide.

As September wore on and flu cases and deaths increased in Boston and elsewhere in the Commonwealth, local government officials realized that they had to do something to stop the spread of this virus. Although doctors and members of the public could not agree on the precise cause of the flu, it was widely understood that when large groups gathered, it spread like wildfire.

On September 24, Governor Samuel McCall held a conference call with the state Public Safety Committee, the Massachusetts and Boston health commissioners, the U.S. surgeon general, the manager of the New England Division of the American Red Cross, and representatives from nurses associations to discuss the dire situation in the Commonwealth. As a result of this call, Governor McCall urged local authorities to close schools, places of amusement, churches, and other venues where people gathered. On September 25 schools were shut down. 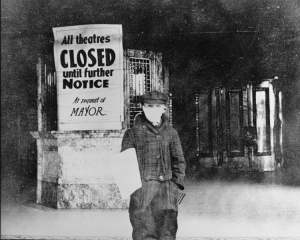 On September 26, Boston’s health commissioner, Dr. William Creighton Woodward (who had only been in that post since the summer) issued a closure order, shutting the doors of the city’s theaters, movie houses, and dance halls and prohibiting all public gatherings.

This was an early effort at “social distancing.” As the pandemic spread along the East Coast and in the South, and eventually through the entire country, other states and cities adopted these measures. Public health education campaigns were launched and discouraged coughing, spitting, and sneezing. People were encouraged to wear masks.

Not all cities initially adopted these rules, though. In Philadelphia, despite pleas from physicians and public health officials, Mayor Wilmer Krusen decided to hold a huge Liberty Loan bond sale parade on September 28 and hundreds of thousands jammed the route. This most likely contributed to Philadelphia’s death toll of more than 12,000 people dying within a six-week period.

Early on public health officials knew that the COVID-19 virus spread very rapidly and that, if its spread was to be slowed, the country had to practice social distancing by closing schools, businesses, and restaurants, forbidding large gatherings and allowing people to work from home. Many state and city governments recommended or ordered people to stay at home.

However just as in 1918 not every state or city initially heeded these coronavirus warnings. The Mardi Gras festivities that took place in New Orleans in February resulted in substantial community spread of COVID-19 in New Orleans County, which as of this writing has one of the highest infection rates behind New York City. 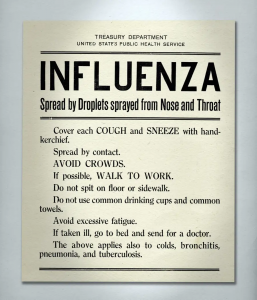 We are now in mid-April and federal officials have repeatedly stressed that the “best-case” scenario resulting in 100,000 to 240,000 deaths will occur only if Americans vigilantly follow social distancing rules. However, the White House administration has not declared a nationwide stay-at-home order even though some states, especially in the South and Great Plains region, have yet to issue such statewide orders.

So here we are now and most everyone is terrified. No one knows how this pandemic will end. We do not know how long the 2020 COVID-19 pandemic will last, how many waves there will be, how many people will get sick, how many will die. It is unclear whether people who recover from COVID-19 will be immune to reinfection and, if so, how long that immunity will last. What happens will be partly determined by how successful social distancing is, how soon large-scale testing is available to give us an accurate number of cases, and when a vaccine is available.

But I do feel certain that we cannot let our terror overwhelm us as it did in 1918. As John M. Barry states in his book, “As horrific as the disease itself was, public officials and the media helped create that terror—not by exaggerating the disease but by minimizing it, by trying to reassure.” And that resulted in the public not trusting the government.

Author John M. Barry believes that the final lesson of 1918 is that “those in authority must retain the public’s trust. The way to do that is to distort nothing, to put the best face on nothing, to try to manipulate no one.” 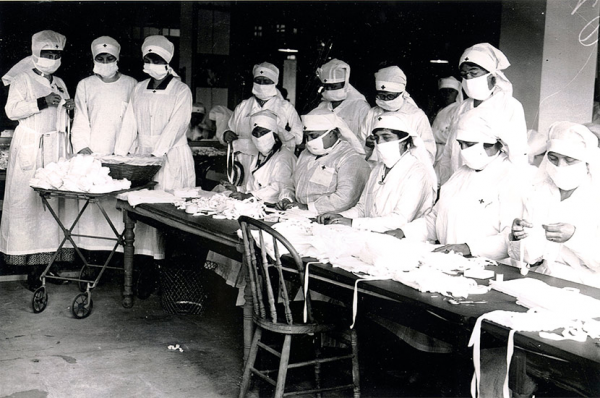 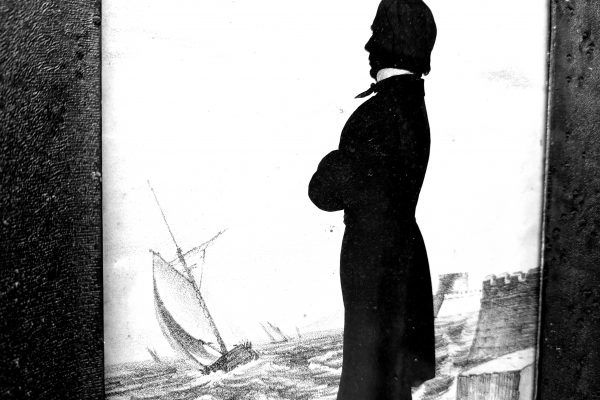 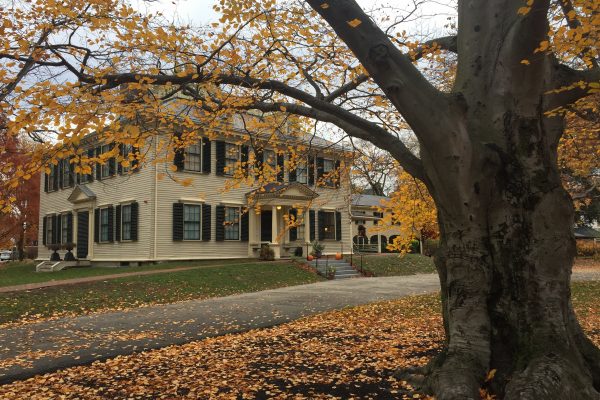