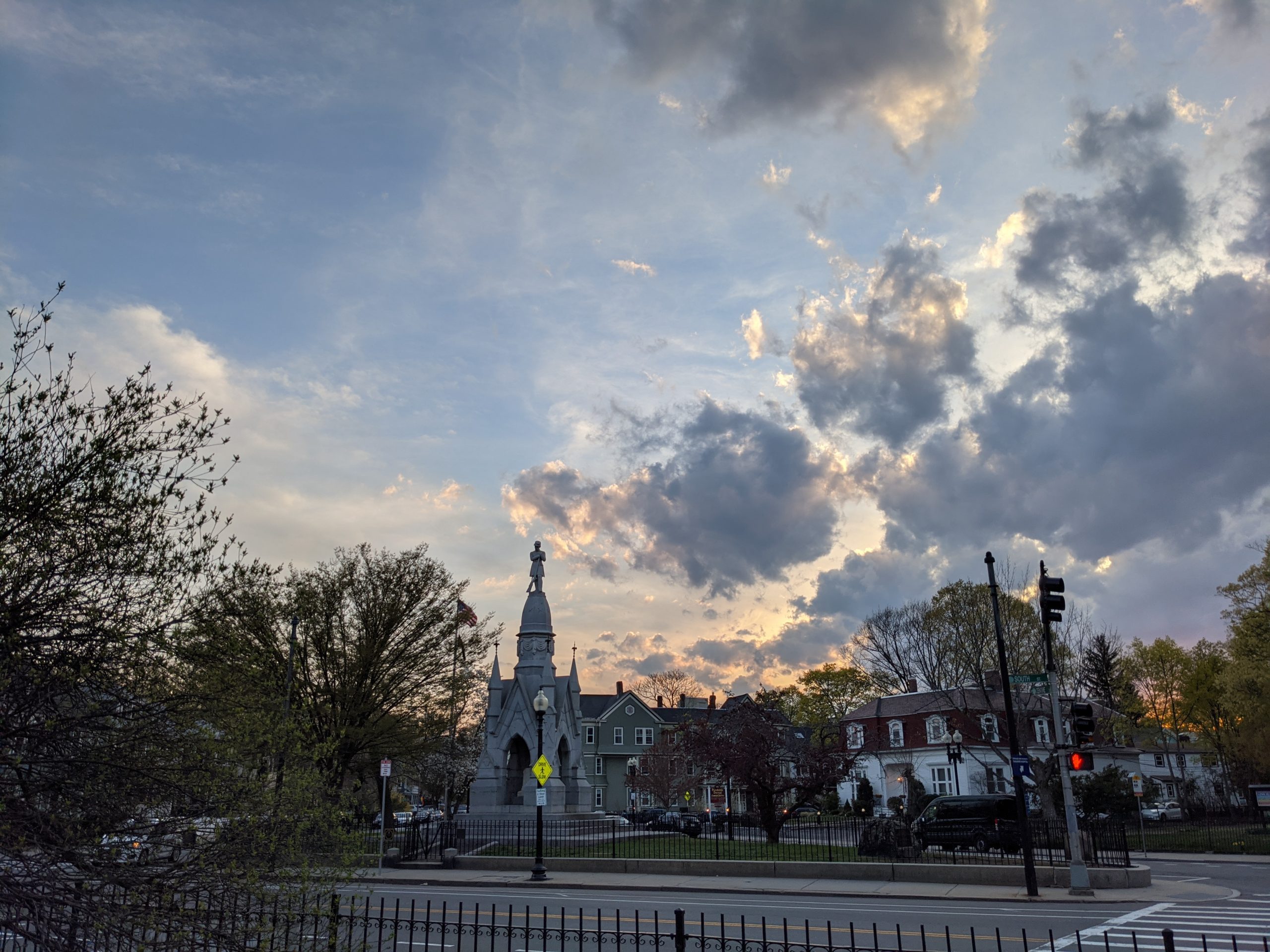 Note: The idea and initial research for this post came from Catherine “Kit” Bermon, who died unexpectedly on December 25, 2020. Kit moved to Jamaica Plain in 2014 and soon brought to the Loring Greenough House the expertise she had gained as director of the Mark Twain House and the Harriet Beecher Stowe Center in Hartford. While caring full time for her husband John in their home she still managed to participate at Loring Greenough House as a docent and as a member of the Community Education and Engagement Committee. Current docents Dorothy Clark and Stephen Pepper have continued her work and present this post to honor Kit’s memory.

You might think that an organization that has existed in Jamaica Plain for 125 years would have an unblemished progressive history. After all, JP is currently home to 306 nonprofit organizations, as reported by Sandee Storey in the Gazette, and the neighborhood has sent progressive politicians to the City Council, General Court, and Congress for decades. And you might well think that a club founded by women that opened to men only in the 1980s would have been staunchly behind the Woman Suffrage Movement that culminated in the 1920 ratification of the 19th Amendment.

Both are reasonable assumptions, but they are inaccurate. The Jamaica Plain Tuesday Club, which has stewarded the Loring Greenough House since 1924, was an important force in the Massachusetts anti-suffrage movement, though opinion within the club was divided. Massachusetts was at the forefront of a national effort: the Massachusetts Association Opposed to the Further Extension of the Suffrage to Women (MAOFESW; the name says it all), which was among the earliest such organizations in the United States, was founded in 1895, just a year before the JPTC, and the two groups worked in tandem for the next 24 years. The local chapter, the Jamaica Plain Anti-Suffrage Association (JPASA), held many events in Eliot Hall (now the home of the Footlight Club), where the Tuesday Club also met. Many women were members of both organizations, including JPASA Chair Eunice Cooksey Dane, who audited the Tuesday Club’s accounts for many years. 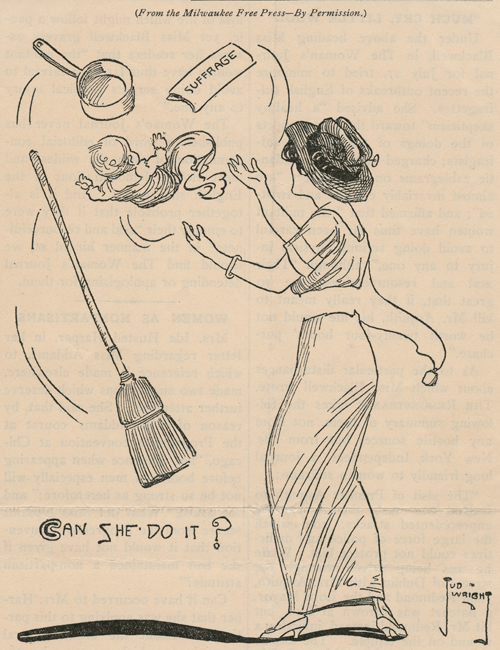 Image courtesy of Collection of the Massachusetts Historical Society

The MAOFESW was organized primarily to defeat a state advisory referendum that would have given women the right to vote in municipal elections. Since 1879 various towns and school districts had begun allowing women to vote for school committees. These women were allowed to vote on the 1895 referendum along with men, but it still went down to defeat. Newspapers around Massachusetts and in neighboring states had published a “manifesto” sent by MAOFESW in September; it was reprinted as far afield as Arizona. Ten years later the group had 11,000 women members; the number grew to 37,000 by 1915, when a new vote, this time on an amendment to the state constitution, was scheduled. The amendment would have extended the vote to women in all local and state elections, but only men were allowed to vote on the proposal. Similar referenda were on ballots in New Jersey, New York, and Pennsylvania.

Organizing both for and against the amendment reached a fever pitch in October 1915. The Boston Globe and other newspapers breathlessly reported the details of speeches, fundraisers, and events such as an “automobile rally” to outlying towns. Each side made full use of symbolism, the proponents using white or yellow roses, the opponents red. The pros planned a giant parade through Back Bay for October 16, including 15,000 marchers accompanied by 30 marching bands. The antis vowed to stand silently on the sidelines, though members who lived on the parade route festooned their houses with red roses and other decorations. The front page of the Globe on October 15 featured large portraits of six women, three from each side. Though it seems not to have taken an explicit editorial position in favor of suffrage, the Globe printed a map of the parade route and the Woman Suffrage Association’s instructions for marchers. It had also solicited and published letters from the governors of each of the western states where women were already voting. Reports after the parade counted 200,000 spectators (and no arrests).

The local opposition campaign culminated in a “Rose Supper” at Eliot Hall on October 25. The Globe reported that 800 people attended, though it’s hard to imagine such a large crowd in 7A Eliot Street, even using both upper and lower floors. The event was chaired by Annie F. Hudson, a member of the Tuesday Club who also led JPASA’s Entertainment Committee. The toastmaster was Francis N. Balch; his sisters Emily and Anne had helped found the Tuesday Club. In correspondence with Emily he said he found the idea of women voting “inexplicably repulsive” and “selfish” and equated it to women swearing or drinking. Emily, and probably Anne, supported suffrage, though Emily’s focus was more on issues of war, peace, and poverty (see “The Misses Balch” post elsewhere on this blog). The evening’s speaker, “Mrs. Thomas Allen,” deployed many common anti-suffrage arguments, concluding: 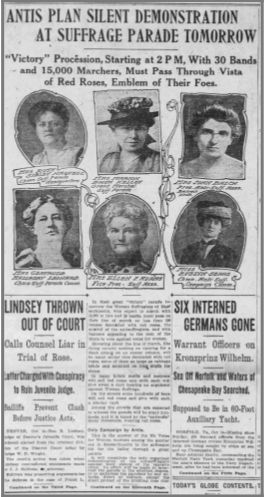 “All of the women that I know who would be of use politically in our State are now working as hard as they can on the boards of institutions, on the boards of charity, in their church work, and last but not least, to my mind, in the much derided home of the modern woman. We feel that our value in public work as nonpartisans is much greater than if we were affiliated with any political party.”

Tuesday Club members who were present probably agreed with her, since one major focus of the club was philanthropy and social service.

Not everyone in the Tuesday Club was antisuffrage, though evidence is slim. Minutes as early as October and November 1897 record an appeal from the Woman Suffrage Association urging contributions to tables at their upcoming fair in honor of Julia Ward Howe and local activist Ednah Dow Cheney, who had helped found the Tuesday Club. However, minutes in 1914 and 1915 are mostly silent on the topic. Guest speakers discussed the “European War” in detail as well as national issues like prohibition, but apparently avoided suffrage.

One exception is from March 2, 1915, when member Mabel Crawford, who regularly presented lectures on current events, “spoke of the passage in the State Legislature of the bill to allow the question of equal suffrage to go before the voters next Fall, and appealed to all women to consider the question intelligently and rationally, and inform themselves where they stood.” The other is from an Executive Committee meeting on October 8, 1915, less than a month before the election:

“A letter was read from the Woman’s Non Partisan Club and an Official Statement of the State Federation, on the Equal Suffrage resolution passed at Marion. This was to be read before the club if the question was brought up.”

Apparently no one at the Club’s general meeting brought up the question. Meetings on November 2, 9, and 15, immediately before and after the election, did not mention the referendum, at least not in a way recorded in the minutes. At no point did the Tuesday Club as an organization take an official stand either for or against.

Despite all the preparatory activity, the 1915 referendum was soundly defeated, as were those in New Jersey, New York, and Pennsylvania. Both pro- and anti-suffrage efforts continued afterward, but their focus shifted almost exclusively to proposals to amend the U.S. Constitution. As the national movement strengthened, sponsoring increasingly large demonstrations in Washington, D.C., it’s possible that Club members were gradually moving toward support, though the minutes are mostly filled with discussions about the United States entering the war and local efforts to support the troops. Executive Committee minutes from December 12, 1916, state: “Resolutions were read from the Equal Suffrage League asking that women be admitted on the same terms as men to civil service positions. These resolutions it was decided to post on the Bulletin Board.” And on October 30, 1917, Mrs. May Alden Ward, a frequent speaker on current events, noted “how we have in this short space of time passed into a different state of existence.”

Once Congress approved the 19th Amendment in the spring of 1919, however, the tone of Club records changes. As current member Sharon Kong-Perring wrote for a recent display at the Loring Greenough House, “At the first general meeting after the passage of the 19th Amendment, the JPTC President and Executive Board urged unity, forgiveness, and reconciliation of wounded friendship.” At meetings on March 23 and May 4, 1920, the redoubtable Mabel Crawford discussed the upcoming presidential election, listing candidates and issues on the assumption that members would be able to vote in November. The Club was still on summer recess when Tennessee cast the vote that would win ratification on August 18, 1920, but the first lecturer in the fall season was Rose Nichols, a vocal Boston suffragist. From 1920 on, meeting minutes frequently mention speakers who urged women to contact state and federal legislators; petitions were also circulated for signature.

Through careful balancing and strategic silence, the Jamaica Plain Tuesday Club managed to survive and thrive in a time of increasing polarization over the issue of women voting. Once the issue was decided nationally, those members who had opposed suffrage became exemplars of democratic governance, graciously acceding to the majority. While we don’t have specific records, we can assume that many members were among the estimated 10 million women who voted for a presidential candidate in 1920. One hundred and one years later, a window in the Loring Greenough House proudly bears a reproduction of a sign proclaiming “A Woman Living Here Has Registered to Vote.”

Wikipedia articles on MAOFESW, the 1920 presidential election, and the 19th Amendment.

The Boston Globe Archives via Newspapers.com