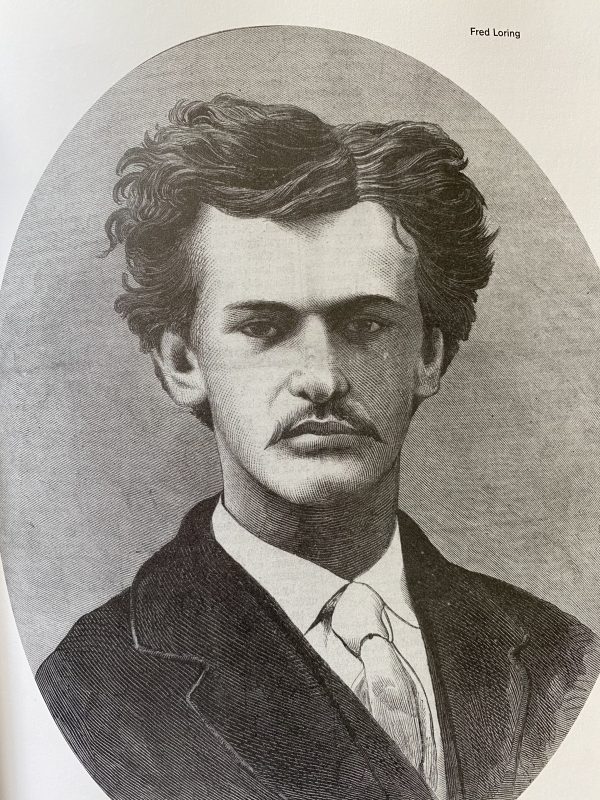 Frederick Wadsworth Loring was born in Boston on December 12, 1848. He was the 5th great grandson of Thomas Loring, the acknowledged patriarch of the Loring family, who immigrated from Axminster, England to the Massachusetts Bay colony in 1634.

Fred, as he was called by family and friends, attended Phillips Academy at Andover and graduated from Harvard University in 1870. While at Harvard, he was a frequent contributor to the Harvard Advocate. He acquired his love of art, literature and writing from his mother, Mary Hall Stodder Loring, to whom he was extremely close. Sadly, his mother died when he was just eleven  years old.
Regarded as one of the most promising of young journalists and authors of his time,  Fred’s writings appeared in several popular periodicals of the day, including Appleton’s Journal, The Atlantic Monthly, Every Saturday, and The Independent. He published a book of poems, “The Boston Dip and Other Verses,” and in 1871 his novel, “Two College Friends,” was published.
“Two College Friends” tells the tale of Tom and Ned, young men who share rooms at Harvard. Although nothing sexual between them is explicitly portrayed, their relationship is intimate and intense, to say the least, fraught with frequent outbursts of jealousy followed by emotional declarations of love and devotion.
Fred, himself, is known to have had a very close relationship with one of his own college friends, William Chamberlain. Some literary scholars believe the character of Ned is modeled on Loring himself, and Tom is Chamberlain. Fred and Will were described by contemporaries as “inseparable.”  Though they became “estranged,” Fred enigmatically dedicates his novel to Will. Also, in the dedication, he refers to the man to whom “I shall owe most of what grace and culture I shall ever acquire.”  This is believed to be Professor Elbridge Cutler, who was very close to, and mentored, both Fred and Will during their time at Harvard. He appears thinly disguised in “Two College Friends” as a life-long “bachelor,” confidante and mentor to Tom and Ned. The only photograph he keeps in his rooms at Harvard, and looks at often, shows the boys together.
Throughout the novel several characters, always male, comment on the striking good looks of both boys, particularly Tom, with his “soft curling brown hair, deep blue eyes, and dazzling complexion.”
Much of the novel is set during the Civil War. Tom and Ned are serving together, of course, in the Union Army. They are captured and taken to a Confederate encampment where Tom is taken seriously ill. Ned is allowed to carry him to the river bank where he lovingly bathes his head and face with cool river water. A Rebel guard standing by observes them and says, “You care for him about as you would for a gal, but he’s prettier than any gal I ever seen anywhere.” A more revealing passage occurs a bit later. Ned, cradling the semi-conscious Tom “bent over and kissed his hot face,” passionately declaring, “O my darling, my darling, my darling!  Please hear me. The only one I have ever loved at all, the only one who has ever loved me. O Tom, my darling, don’t forget it. If you know how I love you, how I have loved you in all my jealous morbid moods, in all my exacting selfishness. O Tom, my darling, my darling.”
To many 19th century readers, the novel may have seemed merely a sentimental story of the Civil War and the story of two devoted friends. To others who, even then, might have had unspoken same-sex thoughts, longings and desires, the book would have resonated in a very deeper and more meaningful way. Today, “Two College Friends” is recognized as a major early work in the literary genre labeled, “romantic male friendship.”
Unfortunately, Fred Loring did not live to enjoy the response and admiration his book would eventually achieve. In 1871, he was sent to Arizona by Appleton’s Journal to report on an expedition led by Lieutenant George Wheeler. On November 5th, in what became known as the Wickenburg Massacre, his carriage was attacked by Apache Indians. The driver, several passengers and Loring were all brutally killed. Fred was just shy of his 23rd birthday.
Had he lived, would Frederick Loring have become more emboldened in his depiction of queer love and romance, or would success and fame have caused him to be more circumspect and, as we would say today, more “closeted?” We will never know the answer to that question, but every reader of “Two College Friends” can make their own assessment. The novel is available through several on-line websites, such as the Gutenberg Project. The entire text is included in Alex Nissen’s book “The Romantic Friendship Reader.”  It is also referenced in “Love Stories: Sex Between Men before Homosexuality,” by Jonathan Katz; “The Hub of the Gay Universe: Boston, Provincetown and Beyond,” authored by Russ Lopez; and “Improper Bostonians,” compiled by The History Project.

by Vincent Longo, board member and docent at The Loring Greenough House